I am so glad the summer is coming to a close. It has been one heck of a ride. It has also been nonstop work, and i'm glad to say I survived. While I had to cancel my vacation the last two weeks to do editing (We lost the proofreader on the team) I have finally survived the writing marathon.

Here I am.
On the other side.
What's that mean for you guys?
Well, it means the LIttlemoon book this Friday.
It means an FBI book in October.
A crossover in November with a side of sexy anthology.
December will get you all hot and bothered as you cozy up to two FBI books. Part one will be the flashback ,and part two will be the present day.
They are all done, completed, and starting editing.

At the end of this month, i'll be back to writing and working on another two FBI books. The flashback and the present day. They will be for January.
February is Oracle. Will there be a valentine's book?
Maybe.
We have to see the workload. Now that i'm required to do a round of editing, again, due to losing our proofreader, I have less time to write. I'm losing a week a month to do that job now. So, sadly, that has to come from somewhere.
So, maybe 2 books in Feb. Maybe one.

I had planned to drop the new Tueur series this Christmas, but again, when you lose a team member, everyone else has to pick up the slack. Rachel and I are at our max when it comes to editing. Maybe next Christmas :)

March will be our Crofty friend back with his mob family, and he will have some new clients.

April will be the Littlemoons, back with more stories, and scary moments. I will tell you that this Friday's book IS A CLIFFHANGER. There was no way to write it without one. So, for my couple reviewers who slam me because I do cliffhangers...I apologize in advance. It is what it is.

May will have the Hunters back, and they are working on finishing their job for the FBI. Will Apology be their final case? We'll find out.

June will be an FBI book and it's going to be an interesting one. I can promise you that.

July--- I haven't decided yet. I think the series that gets the most reviews through Christmas will get that July spot.

August will be back to Mr. Croft. Will Dimitri ever get married? That's the question that we'll all be focused on.

September is back to school, and back to the Littlemoons.

October...Halloween is ELizabeth's favorite holiday. So, she gets this month.

That's all I've planned out, so we'll see what happens in Nov and Dec.
Will the Hunters be around for more books?
Will there be a new series?
I guess you'll have to wait and see.

Until then, this Friday... 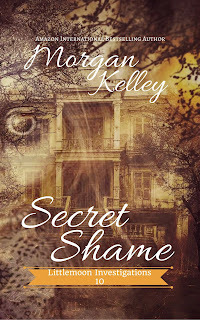 Secret Shame #10 in the Littlemoon Investigation seriesWarning: murder, sex, and adult situations. The dead are surrounding them. They have something to say and their own undertakings in the afterlife. With this case, that is no different. Ridge Hunterhurst has his own mission. It’s to solve the mystery of who slaughtered his family, leaving him as the only suspect. Was it done purposely? Or was it a coincidence? All those years later, and the only reason he stayed out of jail back then was a secret rendezvous with a beautiful girl under the bleachers at her school. On top of that, Fate is being a bitch. That girl? She’s now the detective on his cold case, taking over where her old man left off. Twenty years later, he’s been digging, and someone isn’t happy that he’s stirring it up. His life is on the line, and he needs an intervention. In come the Littlemoons, and the dead. In this case, his people spoke to their people, and they brought them all together. But for what?It looks like they will find out. Only, in the end, nothing will be the same, gifts will be taken away, and the dead…They will be responsible for more than anyone’s Secret Shame. They will be responsible for death.


Sorry I've been MIA, but writing 6 books in 4 months is killer! I don't recommend it. AT ALL! LOL


Happy fall, y'all!
From my family to yours.