Hopefully, by now, you're reading some Oracle Seeing, and having a great time. Well, I just got up to start working (I know...I have weird hours.) and I saw something on Amazon.

Here is the pre-order for the next Littlemoon book out in September. You can find it here.

Everhart Rose meets his match, and he's in for one hell of a battle to figure out if his life can turn around, or if he's stuck in the same old quagmire. 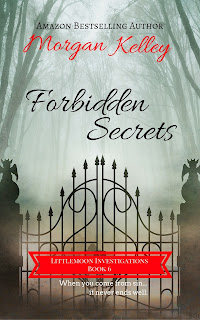 Lennox Easton has one hell of a problem. Someone wants her dead. Her whole family has been eradicated in one single decade, and she’s the last woman standing. It’s all hers, and there’s nothing she wants more than to escape it all.

Yes, she’s rich, entitled, and the talk of the town, but not everything is what it seems. Lennox is about her art. She’s about the peace, and then…she’s about one very cranky man.

When she busts into Littlemoon Investigations, she needs their help. Her time is running out, and she knows it won’t be long. She’s marked to die.

To make it worse, her house is haunted by something so sinister, that might end her too. She’s beyond help. She’s desperate.

Everhart Rose has one goal in life. It’s to be a damn good father. He’s struggled for the last few years, trying to be the best dad to Ivy. There are days he’s winning, and days he’s losing. When he runs headlong into Lennox Easton, she ruins his day.

The socialite is just like the rest.
Spoiled.
Bratty.
Rotten.

He’s hell bent on hating her, even if she does everything right. There is no way he’s letting down his guard.

The team takes the case, they go in, and what they find will rock Lennox’s world. She’s hated and because of her blood, her family, and the sins she had nothing to do with, she’s going to die. Hope is running out.

Time is ticking away.

Will the one man, who can save her, stop hating her, long enough to see that she’s not as horrible as he thinks?

Or will Easton Manor and the Forbidden Secrets be her painfully bloody end?

Oracle Seeing is here, and you can get it now if you haven't pre-ordered. If you did pre-order, you should have it on your kindle!

I hope you enjoy it! I loved Lucian and Bishop!

Don't forget to let me know how I did, and how my team did, by leaving a review!!!!

Here is the ebook.

Here is the paperback.