Today, I'm returning to work after my back surgery. It's been a long 6 weeks!!! I can't wait to start writing this week.

I also have good news. The new Croft spin off book, Dark Justice was just uploaded and will be available tomorrow for pre-order. As soon as I get the links from Amazon, I'll post them here. I can't wait for you to read them. The book has been edited for the first and second time, and both Rachel and Laura have given it two thumbs up.

I think you'll like it. This is Greyson Croft post losing his FBI job. You're going to watch him transform from law man to lawless man, but with one big twist. He's going to be saving Vegas one lost soul at a time.

It's batman meets Robin Hood. He's dark and brooding, everyone thinks he's gone bad, but the family knows the truth. He's dedicating his life to saving people the cops can't (or won't) help. He'll wear the badge of 'criminal' but it's the furthest from the truth.

I hope you like it...
In fact, I think in honor of me coming back to work today, I'll give you a little sneak peek.


Copyright © 2016 Morgan Kelley LLC
All rights reserved. Without limiting rights under the copyright reserved above, no part of this publication may be reproduced, stored, introduced into a retrieval system, distributed or transmitted in any form or by any means, including without limitation photocopying, recording, or other electronic or technical methods, without the prior written permission of the publisher, except in the case of brief quotations embodied in critical reviews and certain other noncommercial uses permitted by copyright law.
The scanning, uploading, and/or distribution of this document via the internet or via any other means without the permission of the publisher is illegal and is punishable by law. Please purchase only authorized editions and do not participate in or encourage electronic piracy of copyrightable materials. For permission requests, email author.m.kelley@gmail.com 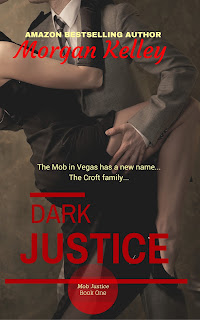 My name is Greyson Croft…

At one time, I was the law in Las Vegas. I kept the streets clean, the bad guys going to jail, and peace in our fine city. Then, that all changed.
In the matter of a heartbeat, it was over.

I kept my word and I made a choice to avenge my family. I let justice go in order to protect the ones I hold dear, and I became an outlaw.
To the cops, Feds, and citizens of the city, I was no longer the law but part of the criminal element. I gave up my gold badge for something completely different.

Oh, I still run Las Vegas, but now it’s done from the other side. I’m still a force to reckon with, but I no longer work for the government or the people of the city.

I work for me.
I am justice.

After a year of cleaning up the mess left behind by the powerful mob and money hungry animals threatening our city, I became them. I became what I hunted, and now I am feared. The police don’t trust me.

While most think I’m crooked, a criminal, and just like the Dominic Marianna’s in the world, they’re dead wrong. I’m still the only one who stands between the seedy element and the people who have fallen through the cracks. The only difference is, now I’m running Vegas my way. My hands aren’t tied, and I can help those who I couldn’t help before.

Honestly, there’s no one to stop me.

The Croft Empire has been formed. It grew from two people who lived and breathed justice and now it’s an entity in itself.
It’s strong.
And it’s not going anywhere, despite what the law in Las Vegas wants.

Because in Vegas the good guy is the bad guy, and the bad guys are the ones who pretend to care about the people of this city. That’s crystal clear from where I stand.

Am I breaking the rules?
Yes.

Am I willing to do whatever it takes to protect?
Yes.

What do I have to lose?
Absolutely nothing.

I’ve been a soldier, a man who served his country, taking that shot to end a life. I’ve been a Director in the FBI, making the tough decisions as I tried to keep the peace.

I did my job.
I followed the rules.
Now I make them.

Will everyone agree with them? Not likely. The police don’t like me interfering, but when I see people being kicked around, I always help the underdog.
It may not be the popular bet in Las Vegas, but I want them to win. I want them to find their missing family, get off the streets, and have good lives. They deserve it. They aren’t the forgotten.

I haven’t forgotten them.

My family will do whatever it takes to help them.
Someone has to do it.
That someone is me.

Being the most powerful man in Las Vegas comes with a price, and I’m not the only one paying it. I have a family behind me. In Vegas, being a Croft means something.
It means money.
It means power.
It means…the police hate us.
It means that if you need help, and the cops won’t even give you the time of day, find me.

I will help you.
I don’t hate the police. We used to be them.

I can’t blame them for being suspicious of us. I would be too. In fact, I used to hate people just like me. I used to wake up every morning, strap on a badge and gun, and head out to make sure no one person was in control.

I don’t tolerate the criminal element.
I am still that person, the one who ruled from the glass tower of FBI Las Vegas, but now I do it my way.

My family had my back when the law and justice never did. My wife, bless her for putting up with me, was a detective and a damn good one. She handed in her badge the day the FBI took mine. She’s my ally in this fight for justice in the city. She’s smart, beautiful, and willing to fight the good fight. On our team, she’s the sleuth. If it needs to be solved, Emma Croft is your girl. She’ll get to the bottom of it. Every gangster needs that beautiful woman on his arm, and she’s mine.
Together, we have something powerful that no one can destroy. We have true love. There is no Greyson Croft without Emma Croft.

And that’s the truth.

Then there’s my ‘son’, Curtis. He was a Fed too. I trained, mentored, and taught the man everything he knows. He, too, left the FBI when my badge was taken, and I’ll never forget that he always had my back. We may not be blood, but we were forged in something so much stronger.

He has joined me in helping the people that justice has forgotten in this city. He’s my hacker. If I need something found, he’s going to be the one who digs it up. He’s good with his hands, and even better with his technology. I trust him to do the job—like I did in the FBI.

Curtis helps me level the playing field.
I need all the help I can get.

Then there’s Dimitri Gideon. He’s Russian, a killer, and my muscle. I never thought I’d need that, but he’s proven his loyalty and worth. He, too, like Curtis, is family by love, not by blood. He’s always had Emma’s and my back, and he still does. If I get into a tricky situation, he’s the one who helps me out. He’s smart, complicated, and has so many secrets that no one will ever find them all out.
He’s also the man who locates the victims that this city has forgotten. Dimitri is the one who started all this, and I call him friend, brother, and partner—for life.

Together, we will clean up Las Vegas.

Then there’s Katerina Gideon. She’s young, pretty, damaged, and my thief. If I need it lifted, stolen, or absconded, she’s my girl. She can pick a lock, scale a building, and get into any locked location.
She can disappear in plain sight. Kat is handy, and she’s part of our team.

We’re lucky to have her.

She’s not alone. With her comes Dimitri’s other sister. Natasha Gideon is a genius when it comes to disguise. One minute she is playing one person, and when she comes back around the corner, she’s someone new.

If you need someone to manipulate the situation, she’s the one. She’s sweet, gentle, and will kill you when you’re least expecting it. No, it’s not all clothes and wigs. She’s lethal, just like her half-brother and sister. Don’t let the girls fool you.

They’re not putting up with anyone’s BS, and that’s how I like them. They have my best interests at heart, and I have theirs.
Family is what matters.

They will always have your back. In life, that’s all you really have. Careers come and go, but the people who love you?
They stick.

In this family, we’re all equal. We’ve been compared to the mob, and it’s damn true.
We’re rich.
We’re powerful.
And we’re doing it our way.

With the rest of the team, we’re taking Vegas by storm. We’re not letting anyone tell us how to find justice. We’re leveling the playing field and helping the little people who were left behind.
We’ve made friends.
We’ve made enemies.
The cops hate us.
The criminals hate us even more.
But the people who lost their way, who were stepped on by the boot of justice, and pushed aside…they need us.
That’s all that matters.

As long as they do, we’re sticking around. Vegas needs that Dark Justice to keep everything fair, and I’m here to make sure it happens.
I am that justice.

When the cops won’t help you and everything seems to be falling in on you, threatening to crush you—find us. When you feel that justice has left the building, and you’re standing there holding the bag—we’ll be there. When you think that you’ve been screwed by the law….
We’re your people.

You don’t have to pay us. We’ll do it for free. Money means nothing to any of us. All we want is justice for all, and for the law to be accountable.
In the end, we’ll get it.

Look out Las Vegas. You feared me before, but you haven’t seen anything. I’m Greyson Croft, and I’m about to be your worst freaking nightmare.


I hope you enjoy the book! Check back in tomorrow for the pre-order links!!!