As promised, the prologue for LOST & BROKEN

As always you guys get to read it first! 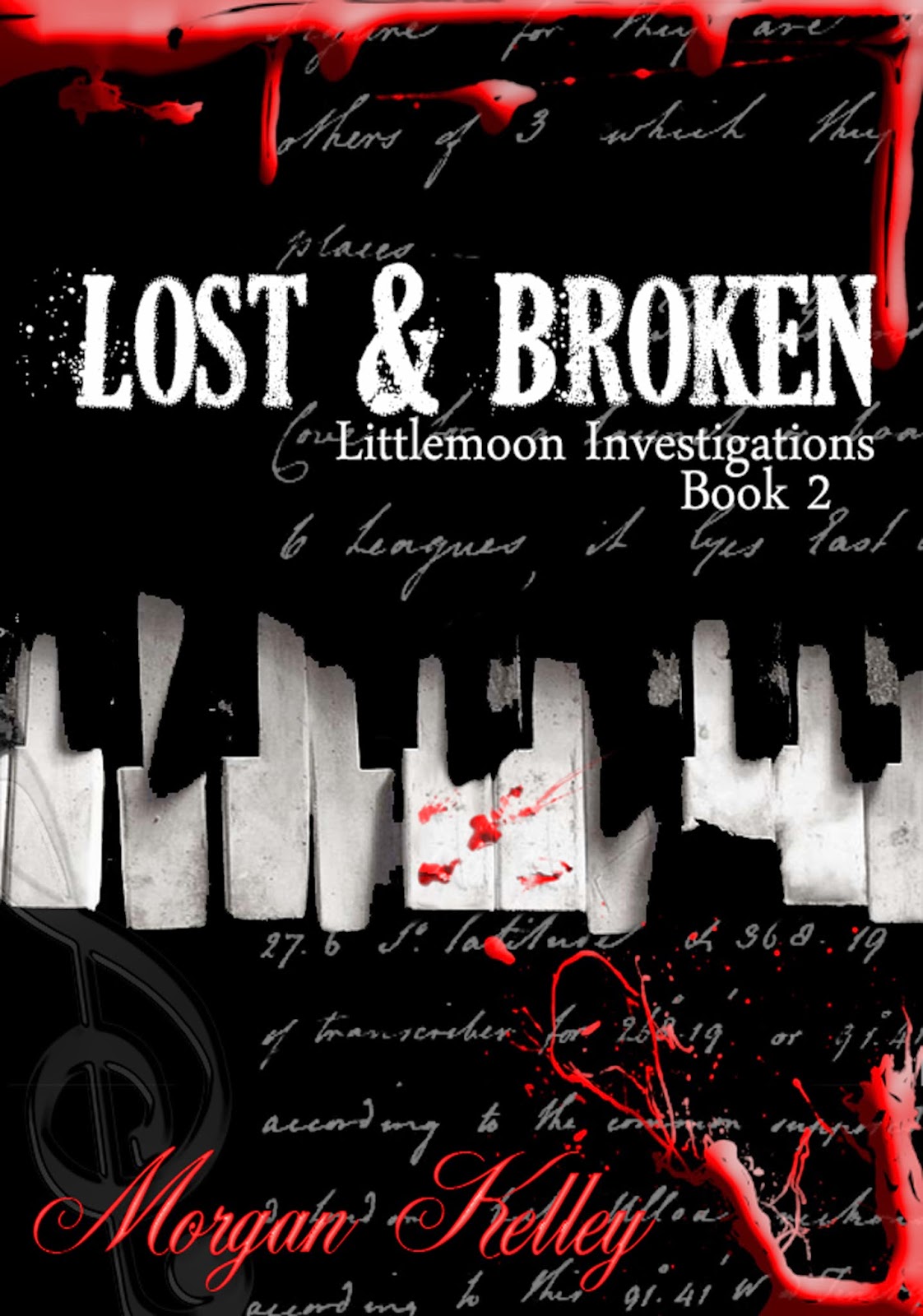 God! She couldn’t handle the creaking anymore. It was beginning to drive her absolutely insane. If she didn't know any better, she would think that the house was haunted.


How was that even possible?


There was just no way.


Hesser Plantation that old, so there shouldn’t be anything creaking or groaning. No one died here, so how could they have a ghost?


Climbing out of their bed, she crept as quietly as possible to the cradle. Once there, she stared down at the little baby sleeping safely inside.


He was her pride and joy.


Gently tucking him back in, she glanced over to the now vacant bed. At one time, she would enjoy coming here to sleep. Now, that wasn’t true. When her husband lost his favorite little piece of fluff, he became almost unbearable. It was as if he blamed her for the trollup running away.


Who knew that he had so much of an attachment to the little whore he bedded in his free time? Maybe if she was a chambermaid, he might actually see and pay attention to her once more.


The most astounding part was that as of yet, her husband hadn’t replaced his mistress. Certainly, he should be able to do it without much effort. After all, she was nothing more than a local girl who worked in their scullery cleaning up after their family, and tending the bedrooms.


What he even saw in that blonde piece of trash, she had no idea. Her parents barely spoke in complete sentence as they toiled away in the fields. How he could ever even be attracted to her, appalled and astounded her. It had to be the fact that she’d open her legs for any rich man who passed her by.


Well, she had news for her. The man of this house wouldn’t be divorcing his high society wife to shack up with some waste of skin and bones.


Unfortunately though, now that she was gone, he was miserable as sin. Thankfully, he had taken the time out of his busy fornicating life to impregnate his wife. At least now she had a rightful heir to their family fortune. Her future was ensured the second a son was born into the Hesser family.


She did what no one else had rightfully done. She’d given him a legitimate child to carry his name and bloodline.


Then, anger filled her. When she had found that the little trollup was pregnant with her husband’s child, she wanted to retch. No, she wanted to grab her greasy blonde hair and bash her head off the floor that she scrubbed. Well, fortunately for everyone involved, that situation was handled. It wasn’t hard to scare the little piece of trash into submission. The night that baby was born, it was taken and sent off.


There would be no Hesser child unless it was born from her womb. If drastic measures needed to be taken, so be it.


Thankfully, the girl’s parents were upset that their daughter had disgraced herself by getting pregnant by a married man. Once they found out, that was easily rectified. They were wise enough to know that their daughter committed an unforgivable sin. A few choice words, and they realized that her loose morals could cost them everything. When she showed up with the sheriff to terrorize them, it didn't take much. It was funny, since she would have bought the child, just to sell it off to someone in a foreign country.


Yes, that was how angry she was.


To add to it all, her husband wasn’t even told that she had given birth. The family promised the little whore would stay away and keep her mouth shut.


That was the part she liked best. If the family wanted to lose their land, their oxen, and asses, it could be brought to fruition.


Little did he know, that this was all for the best. It wasn’t like her husband was the only one the trollup was sleeping with. Rumor around the house was that she had tried to bed her husband’s brother and cousin too. Unfortunately, he was the weaker man, unable to keep his dick in his pants. Had she known that he was like this before she married him, there never would have been a wedding.


Who was she kidding?


That almost made her laugh out loud.


Her husband was the wealthiest bastard in Kentucky. She would have married him anyway. Allowing him to have his little side pieces was fine with her. It meant less time that she had to tolerate his voracious sexual habits.


Thankfully, he managed to give them a son. At least she could look past having to sleep with him because of that. Even after thinking it, there was a little piece of her that mourned their marriage. She was stupid to believe all the sweet words he had once whispered in her ear when they were courting.


Moving back to their bed, she once more heard the sound. Since she was alone, it terrified her. It sounded like weeping.


But how could that be?


The hired help lived downstairs or in the other building, so no one was in the rooms surrounding hers. This floor was exclusively for her and the man of the house. The private wing was off limits to anyone but them.


Walking to the balcony, she stared out at the plantation that was legally half hers. They had an empire here, and she was damn glad. It was perfect, and that’s the way she liked it. In her life, there could be no distractions to ruin it. Some might call her ambitious, but she knew the truth. Love brought her into this marriage, but business made her stay.


She just wouldn’t have it any other way.


Yet, that was another lie. She would trade it all to go back in time to when he loved her.


Again, she heard the noise but this time, it sounded like singing. No one would dare be making noise at this time of night near their room. If they woke the baby, they would be immediately terminated.


Glancing around, she listened to the sound and prayed that he would come home. Even if he was drunk, it would mean that she wasn’t going to have to be there alone. Sometimes you needed to take the lesser of the two evils in life.


Every evening, after the trollup’s disappearance, the house scared her. It seemed to come alive with some noise. In her mind, she knew that was impossible. There had to be a rational reason. Possibly the grand plantation was settling. All the new wood was finding its final resting place, or maybe she was a witch and cursed them before she left.


There were no such things as ghosts, and yet, she swore that she had seen one. Not face to face, but from the corner of her eye.


It was always in passing.


It seemed to speculatively watch her. Wherever she would go, or take the baby, the spirit would follow.


A cool breeze wafted in through the window, blowing the sheer curtains around. They appeared to be hands, reaching for her. In fact, the cold icy touch caressed her skin and gave her goose bumps.


It was June, and it shouldn’t be this chilly.


Then, she heard the laughter and knew she wasn’t alone. There was someone there with her. She could feel the malevolent eyes watching her.


Spinning around, she scanned the room and finally picked up the sight, albeit diminished by the lack of light in the room. What she saw scared and terrified her. The cradle, untouched by human hands, began rocking. It swayed as if someone was standing beside it and lovingly tending to the sleeping babe.


Her job as a mother was to guard her babe at any cost!


There was more laughter, and then the gentle sound of a lullaby being sung. It was one which she remembered all too well. It was the same dreaded melody which his mistress sang to her newborn child, just before it was taken away. It spoke of love and holding onto the child forever.


The whore had run away!


It had been handled by her personally!


Much like it started, the song stopped without warning. In its place were the horrible wails of her child, calling out in some kind of agony. Every mother knew her child’s cries, and something was hurting her little angel.


The babe continued to wail, and the sounds pierced the night, shattering the silence. If she hadn’t been standing there, she would assume the child was in distress. The wails were becoming muffled, as if someone were placing the blanket over his face, trying to smother him in his sleep.


She needed to act!


No one could hurt her only reason to live.


Rushing to his side, she scooped him up in her arms and held him protectively against her body.


“You can’t have my son!” she screamed, holding her baby as if she were the only thing that stood between him and the end of his life.


There was more laughter, but it morphed, turning evil and malevolent.


“Leave my house! You’re not welcome here!” she demanded, as her son screamed at the top of his lungs.


The gentle caress on the back of her neck made her gasp in horror, as the cold fingers touched her flesh.


The laughter exploded around her as the curtains whipped in an angry invisible wind, found only in her bedchamber. It was as if they were reaching for her, and she was forced to take a step back to save them both.


“I want my revenge,” the voice whispered, and then like it began, it suddenly ended.


She carried her son to the bed and stared down into his precious face. The screams had ended, and she was thankful. He stared up at her with tear filled eyes, blinking and trying to focus on the calming voice above him.


“It’s okay, my little love. No one is going to hurt you. Momma is here, and I’ll die to keep you safe.”


He stared up at her with his father’s eyes, and immediately began sucking on his fingers to sooth the fear he had been feeling.


“You’re safe,” she reassured, kissing him on his soft baby skin.


When the bed creaked, her heart began pounding in her chest. She could see the imprint of something moving across the flat duvet. Then, there was breath on her skin and a whisper in her ear.


It had her full attention.

This time, it was her screams that filled the night.
I hope you enjoyed! Lost & Broken will be out the 16th! I hope you read it and fall more in love with the Littlemoons!
Always,
Morgan.
© Copyright 2014 by Morgan Kelley LLC All rights reserved. No parts of this publication may be reproduced or transmitted in any form or by any means, electronic or mechanical, including photocopy, recording, or in an information storage  or retrieval system without written consent from the author. All characters are fictional and any similarity to real life or individuals is coincidental.