Hi all!
Like I promised, here is the prologue to my newest release, Sinner Repent. In Consumed by Wrath, we met Doctor Callista Gaines. Now, you get to find out her back story and how she became Ethan Blackhawk's therapist.

I hope you enjoy it as much as I loved writing it!!! It'll be available by THIS Friday!!!!! So, come on back on March 14th and I'll give you the Amazon links! 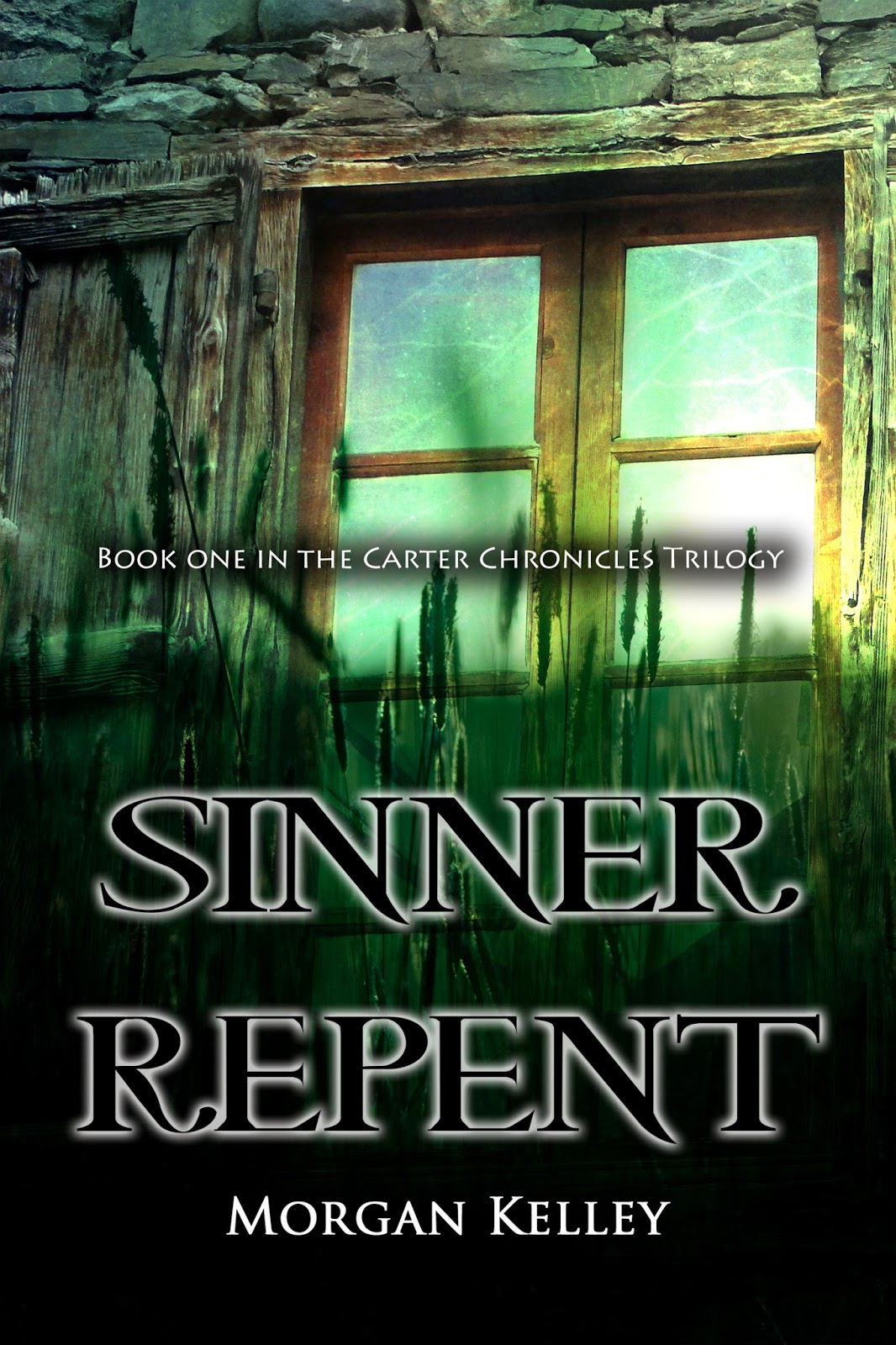 So begins my story...


As Sissy Parker slowly began to wake, she had no idea where she was, or how she ended up there. Trying to move her arms, Sissy could tell they were restrained above her head, and immediately began to panic.


Struggling to get her bearings, Sissy blinked rapidly, trying to take everything in. All around her there were candles and shadows. Deep down, she had this building feeling of horror, as she could sense that there were malevolent eyes watching her from the creepy darkness.


She knew that something bad was coming.


As the fear rushed through her, Sissy’s body shook in terror at all the possible scenarios that were forming in her head. Having a wild imagination wasn’t her friend at that moment.


It was her worst nightmare.


Getting her bearings, she knew what to do.


What caught her completely off guard, was when no one tried to stop her frantic wails for help. Instead, she was met with laughter.


Finally, after a brief amount of time passed, the first shadow stepped forward. Sissy stared at the figure, trying to adjust to the dim light in the room.


“Who are you?” she asked, her voice shaking.


Certainly, this had to be some kind of bad dream. Any second now, she would wake up.


There was no answer to her question, and that scared her just as much as what she suspected to be the truth. In fact, the silence was chilling.


“Please, what do you want from me? Why am I here?” she begged softly, as the words came out more like a whimper.


The figure moved forward, running a hand slowly down her naked body.


Sissy tried to pull away from the whisper light caress. At that point, she would have dislocated her own limbs to move out of her abductor’s reach.


“Stop! You’re scaring me. This isn’t funny. What am I doing here?”


Laughter came from another direction in the darkness, and Sissy whipped her head toward the sound.


Oh God! There was more than one!


At that moment, Sissy knew that she was in some serious shit. Even she wouldn’t be able to talk her way out of it with her pretty smile and nice clothes.


“WHO THE HELL ARE YOU?” she screamed, as two other figures moved into the dim light beside the first one.


They were all clothed in hooded black robes tied with red silk belts. The first figure, the one who had touched her, must have been the leader, as that robe didn’t match the others.


“We are The Brethren of the Blood.”


That didn’t sound good at all. In fact, that sounded bad.


“What do you want with me?” she asked, scared out of her pretty little mind. The last thing that she remembered was a sharp pain in the back of her head, and then…


And in big trouble.


“We’re here to cleanse the sins which are suffocating our town.”


Sissy glared at the figures who were moving into a circle around the table she was lying on. The tears came as she pleaded for her life.


“I’ll do anything if you let me go. Please, this has to be some kind of mistake. You have the wrong person!”


“No, Sissy, we have the right one. You’re a vile example of humanity, and we’re here to fix what’s broken.”


Suddenly, the words registered. “What do you mean cleanse? How are you going to do that?”


“We’ll make you our offering, purifying the town of the first sin.” They began moving around her, touching her naked flesh with their hands.


At the contact, the bound woman began getting more agitated. Her face was etched with desperation.


And yet, they paid her no mind.


Sissy began to struggle, pulling at the bonds holding her to the table. She knew she needed to fight.


“There’s no use in struggling. We’ll do what needs to be done, and then make our offering.”


Reality hit, as Sissy finally understood what they were going to do to her. In the back of her mind, the logical part of her brain was warning her of what was to come. The confusion was finally overcome, and now it demanded she flee.


The maniacal laughter was enough to tell the tale.


Sissy was going to be murdered.


“No, please! I’ll do whatever you want! Please don’t kill me!”  The begging had escalated and was now more desperation than anything else.


More laughter emanated from the circle, as they moved closer to the woman. Her struggles only incited them, making the inevitable more enticing to them.


The first figure began opening the red robe as Sissy stared in horror, shocked to see who lay beneath the hood.


There was no conceivable way that what she was seeing was true.


“Oh, God, no,” she whispered at the thought of what was about to happen.


The other two joined in with laughter.


Looking up into the face, it was completely void of any emotion. It was as if there was no concept that what was coming was wrong.


One by one, they each undid their robes.


Horrifyingly, they were all familiar. Sissy knew each of them personally.


Trying to get their sympathy, she gazed into each set of eyes and pleaded her case. “No! Why me?” she asked. “I never did anything to hurt you!”


Her words fell on deaf ears as they moved toward her naked body.


Sissy started to scream, praying that someone would hear and rescue her. Before long, Sissy could feel something being stuffed into her mouth. It was then taped shut with a large piece of duct tape.


Her body reacted. Immediately, she began gagging as the tears stung her eyes.


“Hood her,” said the first figure, picking up a shiny silver blade. The intent was to let Sissy Parker see it as her final memory in this world. From the look on her face, as the hood was drawn over her features, it did what it was intended to do.


There was nothing but fear present, as the end came closer.


Sissy tried to cry out in pain, as the razor sharp knife began tearing through her body. From the motions, she could feel something being carved into her flesh.


The blackness surrounded her, as what little she could see swam in swirls. It was coming to swallow her.


Her only thought was how grateful she was that once in the abyss, she wouldn’t feel any more agony.


As the three cloaked figures stood around Sissy’s body, they began the long awaited ritual. It was now underway.


The Brethren had deemed her life forfeited.


Sissy was the first one chosen.


There were words spoken over her as blood rushed, gushed, and spilled on the ground.


As it coated her body, the room was heavily tinged with the scent of copper pennies. The only thing lingering there, which was more powerful, was the silence.


In absence of all talking, one message was clear.


It was just the beginning, and they enjoyed every second of what they had just done.

When the ritual had ended, they moved Sissy’s barely alive body to the field out past Walker’s Point. They found the perfect spot and laid her in the grass.


Who knew how long it would take the law to find her body? Yet, if it was meant to be, it would happen.


The leader of the group pulled the black hood from Sissy’s head and stared down at the wide-eyed look on her face. It was quite obvious that she had suffered greatly.


Now, it was time to end it. With one slice to her neck, the blood trickled out and coated the message sickly.


With a gasp, she struggled for her last breath, as her life ebbed away.


This woman fought for life, every step of the way.


For that, they were grateful.


Stepping back, the three stared down at their masterpiece and admired their handiwork.


Sissy Parker may have been the first one to die, but practice didn't have to make perfect.


They had done it to the letter of their law.


At first there was worry about making a mistake, but that had long since passed. Their only hope was, as the next ones came to them, that they too, would each be just as special.


No one said anything as they turned to leave.


Each of the three were living in the moment, in their own way, and committing this night to memory.


Everything had changed, and now there was no turning back to what used to be.


As they left the beautiful woman alone in the wet grass, the next mission would be to head home and climb into their warm beds. There was nothing but pure unadulterated satisfaction filling them. Hopefully, they would each be able to sleep, despite the adrenaline still surging over a job well done.


This sacrifice was going down in the books.


With one glance back, the moon eerily shone down on the destroyed life of Sissy Parker. Even from where they stood, the final ominous word was visible.


Each saw ‘PRIDE’, carved grotesquely into her chest, and they were jubilant.


Now, everyone would see her for her true sin.


There would be no doubt as to what had caused her death.

This was on her, and it was only beginning.


Book two in the Carter Chronicles will be out for Christmas!!!! Then, you'll meet Luke and learn about his journey with Maura.