Quess what is available for pre-order? 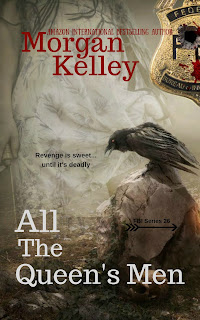 I hope you guys enjoy it!
More FBI coming this year! 2 more books in December!!!!

You can preorder it here.


All The Queen’s Men Book 26 in the FBI Thriller SeriesWARNING: This book contains adult content, violence, language, and sexy Natives behaving badly,(m/f/m sex scenes).She wants revenge. Plain and simple. This has been a long time coming, and justice is going to come to those who escaped with their dirty deeds. She’s going to bring them to justice in blood and death. It’s the best way to do it in her eyes. She’s leaving the Queen of Hearts playing card behind, and a signature to own their deaths. Elizabeth LaRue…Awkward.Elizabeth Blackhawk is chasing the killer in what might be one of her last cases. With Ethan making up his mind as to whether or not he’s going to run for Vice President of the United States, her time as a Fed just might be up. So, she’s determined to find the killer masquerading as her—the younger her. Only, it’s not as easy as she’d hoped. This killer is twisted, sick, and really hates men. Clearly. Can Elizabeth Blackhawk reclaim her name? Or will it all come down to a showdown with one bullet…?The Queen of Hearts is ready to play her hand, and there’s only one woman who can stop her. But can she save All the Queen’s Men?
Only time will tell.