There's one thing I've noticed now that I'm getting older. Time is going by so quickly. Today, my next book, Haven of Nightmares,  ( book five )  goes up for presale. I swear I was just writing this before thanksgiving, and now it's ready to be released into the world.

I loved writing this book.
When I first decided to spin off the Littlemoons, I wasn't sure that I could pull it off. After all, the FBI series has a lot of forensics, lab scenes, and the sex. (Can't forget that) I wasn't positive I could transition to a spooky series. When it was suggested i try my hand at a grown up version of Scooby-Doo with a twist, I actually laughed. Thank God my friends had more faith in me than me.

Needless to say, this installment in the Littlemoon Investigations series is going to be the spookiest of them all. We have a killer, some crazies, and a lot of bumps in the night. I've found that I love the paranormal and ghosts. They're so much fun to play with. Trey...Bethany... they make me smile when they give Julian a hard time.

So, I hope you get some giggles, a few tears, and a couple of gasps when you read Haven of Nightmares. I know I did, and I knew what was coming! 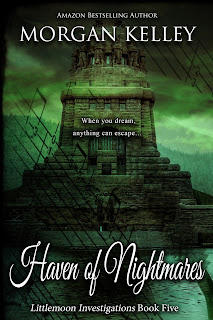 Roman Remington has a secret. It stems from his childhood and his family. He’s a child of privilege who, on a horrible day, lost it all. His family had created, built, and run a teaching empire. The wealthy from around the country sent their children to Remington Academy to get their educations. At one time, it was the best the East coast had to offer.
Haven had it all…
Literally.
Something horrible lurked there in the hallowed halls.
It was death.
It was destruction.
It was blood.
So Roman did what he thought best.
He left, never to return.

Now, all these years later, he still owns the shuttered academy, and he has no intention of going back. That is until on the eve of his family’s deaths, she walks back into his life.

Matilda Boyd is beautiful, smart, witty, and the spitting image of her murdered twin, a girl Roman once loved. As soon as she tries to hire the Littlemoons, Roman has no choice but to come clean.
It’s all coming out, and Roman, Matilda, and the Littlemoons are on the case. They need to find who committed the town’s worst atrocities, and who is still reveling in the blood.

This is Roman’s worst nightmare.

Haven and Roman will never be the same again.

Off to start working on the Vampyre series for this christmas! I hope you all enjoy them when they come out! Flynn has a lot of changes coming in his life. I hope Jolie and Jacques are ready for them!