Tomorrow is vampire day!!!
Dangerous Influence is coming out!

You can find it here.

There are only two more books after this one in the series. Next month is the 6th book, and next year the series wraps. If you haven't gotten to know Jolie, Flynn, and Jacques, what are you waiting for? 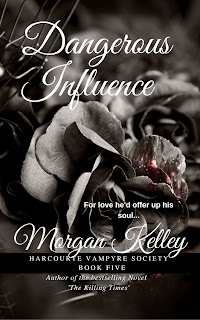 Centuries pass and yet one thing remains the same, we are predators and they are the hunted. What happens when the lines become blurred and the killers are now the only creatures who stand between humans and death?

It’s Christmas and killing is in the air. Detective Flynn Brogan has a new case tossed into his already vampyre filled life. It’s one he can’t seem to figure out.
Enter in the love of his life.
A pregnant Doctor Jolie Harcourte has been asked to step in and help the men get a lead on this tricky killer. Again, reminding Flynn of the case that started it all. Once more, the detectives are on the hunt for a killer frequenting clubs. This time, it had undertones of BDSM.
As they chase a bondage-loving lunatic, Flynn is forced to make the ultimate sacrifice for his mates. He has to give up the last thing he has in life in order to save his children, his woman, and himself.
His new immortality has strings attached, and Flynn doesn’t have a clue as to what is coming.
WHO is coming...
Death’s controlling this ride, and before it’s over, Detective Flynn Xavier Brogan will be a new man.

Their mistress has one thing on her sadistic mind.

Owning them all with her Dangerous Influence.