Hi everyone!
I'm back to the land of the living, and happy to report that my back surgery went over without a hitch! That's not the only thing that was smooth sailing!

Haven of Nightmares was released, it hit the top three on Amazon, and it looks to be a success! I hope you're all enjoying it and finding it as much fun as I did! I love Trey Christensen. As a ghost, he cracks me up!

Thank you so much for all your kind messages, reviews, and emails. I'm in one piece, I've gotten my schedule set up for my return, and I promise the books will be coming! Right now, the next Oracle book, Oracle Seeing is in the editing process. It'll be out in July, and i think you'll really like it. Bishop Killion is awesome. She's tough, she's funny, and she's out to save the man she loves. Lucian Monroe is damaged, scarred (literally) and hiding from the world. Together, they can save Ravenswood from the evil stalking it. 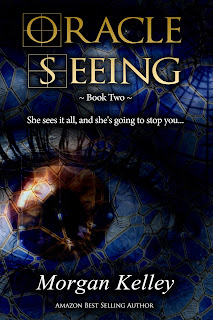 This book is a two-parter. I don't do cliffhangers all that often, and this one really isn't one. There will be resolution at the end, but the story has a second part. You'll understand once you read it. The team is going to have to help one of their own. (HINT: He's a Marine.)

Oracle Saving, the third book in the series will be out in January, and it will be Jagger's story. Everyone is always asking me when he's going to have his chance to find love, and this is it. So, forgive me for the minor cliffhanger. It was the only way. Since Jagger Armstrong is a tough character too, he couldn't have a simple story.
It had to be a struggle, much like his life. Roxanne Faust is going to be his biggest battle, his strongest adversary, and the love of his life.

If he can get through to her. 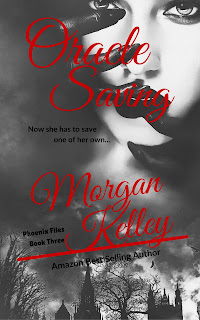 PS. Here's the first look at the third cover.  No one's seen it yet but you guys!

I promise to do him justice!

Anyway, It's back to relaxing for me. I have some books to read, some outlines to scribble down, and a lot to think about as I do my 6 weeks of recovery. Once back to work, I'll be writing the next Littlemoon book, and then three back to back FBI books. We're onto 2017's book schedule, and there's big things coming!!!!!!!

Happy Monday!
Leave lots of reviews! They're better than flowers for a surgery recovery!!!!

Much love, Mayhem, and Murder,