The new cover is here.

Everyone always asks me when I'm planning on sharing Gabe and Livy's story. I get that question at least once a week.

Well, it's been in the works, but the stars all had to align. They finally have. Coming in Feb or March next year, you'll get a peek into Elizabeth's past. How she became an agent, her first cases, and the one choice that set fate in motion. In Past will Haunt, you're going to see it all unfold. 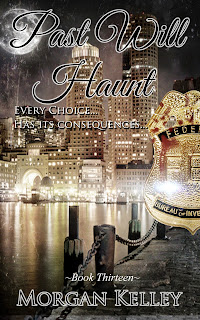 
We all recall from True Love Lost that she took the life of the man who assaulted her partner, and best friend. When the serial killer that she was hunting turned on Livy, Elizabeth broke the law and committed the ultimate crime.
MURDER.

We're going to go into her past and see what happened, live it through her eyes, and in the process see what her life was like before Ethan Blackhawk. We're also going to see his life unfold too. They're going to just miss each other, time after time. Proving that fate is in control after all.

In the following book, Choices will Destroy  ( book 14) we're going to flash to present time and see how that one choice to kill the serial killer will change their lives. It's going to be raw, emotional, and heartbreaking.

No one is above justice.

I pondered offering these two books as one mega novel, but it would just be too expensive for my fans who buy paperbacks, so I had to break it in to two parts. I always promised my fans that I wasn't out to make money on writing. I do this for the love of it. (Okay, maybe i do it because i love living in a fantasy land too) It's cheaper for you the readers to get it in two pieces than if i had to raise the price of the kindle books too.

I know i promised a mega book, so to make up for it, these two books will be released back to back. One on a Wednesday, and the second on the Friday. You'll have two FBI books in one month :)

I hope you'll love them.
I hope i can pull it off and write them to all of your standards. You know what I'll be doing on my summer vacation!!!!