All good things must eventually come to an end.
Yeah, vacation is over.
I was up at three a.m. toiling away on the projects that I put off for the week.
I just released the next book in the Vampyre series. The Blood Retribution. It'll be out on kindle and paperback by Wednesday.
My only regret about the series so far, is I don't have the publishing rights to my first book until 2016. Yeah, I signed a contract with a publisher and now I'm locked into them holding that book hostage.
Bleh.
Oh well, it's a lesson learned when dealing with publishing companies. That's why I ran for the hills as fast as I could with the rest of my books. I now finally re-own the rights to The Junction  and in January, I retain the ownership to Serial Sins. Both will be reissued with new covers and on kindle.
Yay!
Today I get The Killing Times back from the re-edit. I'll be pouring over it to get the second edition for the book released by Friday. From what I've been told, there were some editing issues and everything is currently cleared up. As a writer, I don't have the ability to edit my own work. When I'm reading I don't see the basic mistakes. So, that's why I always use a second set of eyes.
Since I haven't been ripped to pieces on the other books, I'm going to assume they're fine...
Yeah, that statement will come back to bite me in the ass, I'm sure.
I also picked the new picture to be the cover art of the second edition book. I really like it, but then I really liked the first book too. 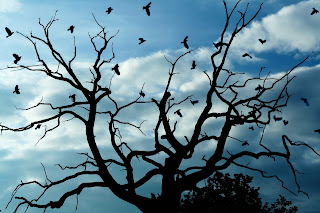 This is by Alexei Novikov out of Sweden. I like his work a great deal.
This was my final choice, and the one that will be taking the place of the artwork. I got good reviews on the cover and a few bad ones. Some didn't like how the first book wasn't a picture and the rest of them were and others liked the colors and unusualness.
Which goes to prove that you can't please everyone.

We had some really great sales this weekend. I'm guessing the weather helped here in the Northeast. I did notice that my books were also purchased in Japan, Germany, Great Britain, and Ireland. So, to all the readers outside the US, enjoy and email me! I look forward to hearing from you.

Back to the grind today.
Yay!

Much Love, murder and mayhem.