When is it going too far?

Okay, here it is in a nutshell. If you read my books, you generally notice my prologue is a tad bit gruesome for the customary romance. That's why mine is a hybrid. I like to blend the two. I usually go 'balls to the wall' with the prologue, making it as realistically gross as possible, and then ease up the rest of the book.

I know some people don't like the nature of it all. I have a group of test subjects (AKA my friends) that I bounce the prologue off of often. When Tammy (proofer extraordinaire) calls me and is freaking out about a scene, it then gets tossed to my next two guinea pigs. Sarah and Holly. I don't often talk about my other girls, but today i'm going to for a change.

Prime example is the book Fire Burns Hot. Tammy calls freaking out that its beyond gross and she can't go any further. (Yeah, read my previous blog about me pushing her out of her comfort zone) What do I do? Panic? Cry? Curl into a ball and rock back and forth on my office floor?
Nope.
I send it to the back up team. Sarah and Holly get an email usually titled HELP!  I'm sure they cringe,knowing what's coming. I paste the whole damn thing in there and send it off.
Here's the general conversation:

Tammy: You went too far.
Me: You don't say. On what this time?
Tammy: Crispy skin with subcutaneous fat bubbling to the surface while her skin went taunt around her mouth.
Me: Hmmmmmm. Really? Because I thought I could have been worse.
Tammy: OMG!
Me: We've had this discussion before, didn't we?
Tammy: You need a second opinion. WAY too far this time.
Me: Okay.

I bang out an email begging for help from the other two ladies in my life.

Me: Guys, Tammy said I went too far. Did I?
Sarah: I read that and literally laughed. Here's my favorite part. 'Crispy skin with subcutaneous fat bubbling to the surface'. It's gross but so you. I love it.
Holly: Too far? No, not really.

If you knew my friends, you'd understand how funny this all is. Tammy is probably the wildest person I know. The girl makes me blush. But toss in some crispy skin and she's ready to break up with me. (I actually get money from her husband to make her nuts. Its pretty lucrative)

Sarah won't read my books in the dark. Yet Crispy skin with subcutaneous fat bubbling to the surface makes her laugh. I swear the woman is my sister from another uterus.

Holly is damn hysterical. Sometimes I want to gross her out just to see if it's possible. Even pregnant she has stronger stomach than I do. I swear she wants to chant 'more guts! more gore! Come on you sissy girl, kill them better than that! What are you? A man?'

Thank you ladies for bearing with me through it all and being an awesome set of women. I love you all and appreciate how you tolerate my craziness.

Needless to say, I apologize in advance if body soup or Crispy skin with subcutaneous fat bubbling to the surface freaks any of you readers out. I'd like to say I was going to tone it down, but let's be honest.

I just won't. I do promise if you make it past the prologue, it does get less gross and then into the romance and personal aspect of the book.

Much love and Mayhem,
Morgan

It's a chilly day here in the Northeast of the country, but it's still a great day. Why you ask?
Because I'm more than halfway through the next novel. It's been a brutal week of 16 hour days and pushing myself through exhaustion. I've already logged an 80 hour work week in five days. One more week like that and I can wrap the book. YAY!

Today is also a free download day of The Killing Times  for the kindle on Amazon. I like to give it away once a month to friends of people who read the book and enjoyed it.

I've resolved a few loose ends in Darkness in Truth that were left hanging in book three True Love Lost.  I think I tied them up in a way that's going to make the reader happy. Then again, whenever I get too confident on what makes you all excited, I get surprised. I guess I should say that I'm happy with my vision of what's happened to the characters.

Today I'm also contemplating how long I plan on running the Elizabeth, Ethan and Callen story line. With two new projects on the table, I may have to cut back on how many novels I drop in the FBI series this year. Last year, I began this series and planned three for this year. Since last fall (six months ago) I've dropped five novels. Which isn't impossible, but at almost 200,000 words each, that's a lot of writing.

Rarely do I drop the cover before I release the book, but I thought i'd give you all a look at the next two planned covers. Here's my plan for Book five in the FBI series, Fire Burns Hot. 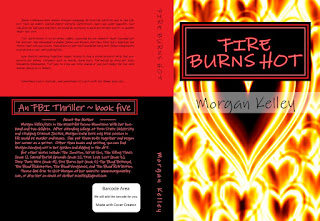 I also have the next cover planned for Darkness of Truth. It's still in the beginning stages of design.
I'm good with the cover art, but I still have to write the synopsis of the back cover. So ignore the gibberish. It's just there to fill the space. 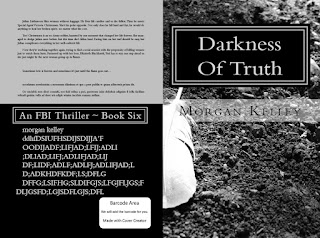 I had originally changed the cover style for book five and my proofer, Tammy nearly went shit nuts on me. I kid you not. The first thing she said was "NOW it doesn't match the others." I will go on the record and say this once again. "You were right, Tammy." I shouldn't have screwed with the covers.
That being said, when I meet her this morning for bacon, she's going to be a happy girl.
I've found I've been telling her she's been right a lot lately.
Like every damn day. I am so off my game.
Okay, here's my random email question for the day. I like to toss one or three out there with every blog to reassure you all that I do read and answer them. It's me. I don't have an administrative assistant yet, and I can't get my cat to use spell check. So until he cooperates, i'm on my own.
Here we have it.
Why did you opt to blend the relationship between Callen, Ethan and Elizabeth? Is there a reason that you decided that a threesome would work in your books? ~ Jayne.
Okay, I get this question a lot. For those of you that haven't read past book 3 True love lost,  stop reading now! I may give away more than you want to know. Everyone is always fascinated with the idea that a couple can be more than just the customary man and woman. Whether it be a gay relationship or a threesome, it's always our nature to be fascinated with what isn't the norm. I wanted to show the reader that in literature, you could show a meaningful relationship between three people that didn't involve erotica. I decided to go with two brothers, because there was already that bond between them. Despite what happened between Ethan and Callen in their past, I wanted to prove that they could come together in life and love. To do this, I had to make sure Elizabeth was a strong central point. If the woman can't hold up to the overbearing, dominant male personas than it wouldn't work. I also went there to be outside the box. There are so many romances out there with guy meets girl, girl and guy have drama, guy sweeps her off her feet and they live happily ever after.
If you've read past book three, you realize I like my characters to have 'semi real' situations in their lives . Elizabeth is a normal woman. She had a life outside it all and she also has the same emotions as all of us. Anger, fear, weakness and strength.
I think that when we step outside the box, we open ourselves up to so much more in life, and I wanted my books to be different. I get pushback on the sanctity of marriage, on crossing the line and going too far. In fact, Tammy (my go to girl) nails me on it every book. If you could hear the conversations you'd probably laugh.
I found that when I put something into the book and it's outside her comfort zone, I've achieved my goal. When the phone rings and she tells me I made her squirm or uncomfortable than I hit it on the head. She's my barometer on going too far and not far enough. I have to admit when I stir her up I get a good giggle.
Much love and mayhem,
Morgan
Posted by Morgan Kelley at 3/09/2013 06:49:00 AM No comments: