Dangerous Retaliation is here!
You can preorder it now!

I'm so excited about this book. We're watching Flynn become more and more like them even as he struggles to hold onto his humanity. It's fun to watch him morphing into a killer, all the while the killers are picking up pieces of him too.

There are big changes coming for Jolie Harcourte. BIG ones!

If you're not a fan of vampyres, you really should give these three a try. There's mystery, love, and sex all rolled into undead fun. I promise you won't be disappointed. This is my twist on vampire romances, and I stay true to Morgan Kelley style.

As always, here's a sneak peek! 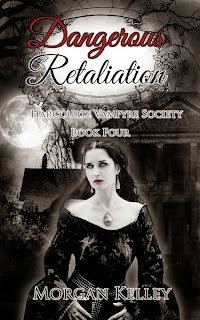 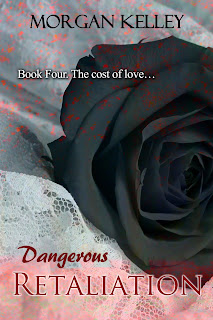 Book 4 in the Harcourte Society Series

Starting his SUV, Detective Tommy Gress could finally call it a day and retire to his place. He’d been on shift for almost eighteen hours straight, thanks to a new string of serial killings occurring in the city. In all his years as a cop, he’d never seen anything quite like it before. It was like the perp was trying to make them chase their tails.

It had him confused.

It had worn him down.

He’d waded through enough blood, gore, and death to last him a lifetime, and when he finally cleared his present workload, he was going to take a vacation--a long one. In fact, he might go visit his best buddy, and previous partner, Detective Flynn Brogan, for a couple of days down south.

That was a damn fine idea.

It might be nice to take in the sights and relax, all the while ogling his old partner’s sexy babe.

Now…that was what he called a vacation.

It brought the first honest smile to his face in hours. He truly missed Flynn, but how could he fault the man for packing up his life to follow Jolie Harcourte?

She was sexy.
She was smart.

Oh, did he mention she was sexy?

Had it been him, he would have followed the beauty into hell and back. There was something so damn hot about the woman. He just couldn’t put his finger on it. Maybe it was her long black hair, the sweet lavender eyes, or her super fine body. Honestly, everything was perfect, and he wouldn’t mind finding a woman just like that too.

Babe selection had been a little scarce. True, he was seeing someone, but it was all off. Tommy’s gut was screaming. There was something…wrong.

Letting it go, he pulled out a pack of smokes and got ready to light one up. Like his long day, his nicotine cravings were ungodly. This would be his first cigarette all day. He couldn’t even steal away a minute to smoke, or pee.

Yeah, the day had been that bad.

As the Zippo lit up, unfortunately, so did his phone. Without even looking down, Tommy knew that his well-deserved break from death was officially over.

“Shit,” he mumbled, as he reached for his cell. “Detective Gress,” he snapped, trying to remember that he was a civil servant, and despite how exhausted he was, this was his job.
There was a BIG emphasis on the word ‘servant’, as of late.

“Detective? My name is Zola Saran, and I think I saw something that might help you on your case,” she offered softly.

That cheered him up.

“Really? What have you seen, ma’am? We could use some information or a credible witness to help this case along.”

“I believe I saw an individual walking out of the alley where that man was found dead last night.”
She could hear his breathing pick up in excitement. Zola couldn’t help but smile.

This was too easy.

The humans were quite stupid when it came to trust. In fact, lambs to the slaughter were harder to kill. Excitedly, her plan began to fall into place.

“Can you meet me at the police station, so you can give your statement?”

“No, I can’t, Detective. Is there any way that you could meet me at my home? I have a sick child and no one to watch her.”

Gress sighed, dropping his cigarettes back onto the seat.

What choice did he have?

It appeared that smoking, along with sleep, were luxuries that he couldn’t afford.

“Sure, give me your address,” he stated, scribbling on a pad as he pulled out of the parking lot. “I’ll be there in five minutes.”

“Thank you, Detective. I really appreciate all the hard work you do to keep our city safe,” she added sarcastically, unbeknownst to him.

Gress closed his phone and cursed.

He was so damn close to getting home and getting a few hours of sleep that he could almost feel the warm sheets wrapped around his bone weary body.

This day just sucked all around.

“Son of a bitch,” he muttered, picking up his phone again to dial his new partner. When it was dumped into voicemail, he realized she must have been smart enough to shut off her cell.

Leaving a message, Tommy explained the situation and where he was heading. Hopefully, this would be a big break for them, and they could shut this mess of a case down.

He prayed that was the truth.

Heading toward the address that the woman gave him, his gut knotted.

This house was in the middle of nowhere.

Yet, he was so damn tired, he opted to push his instincts back down. For now, he’d go, get the interview done, and head home.

That’s all he wanted.

He was a desperate man, and he’d give anything to have some down time.

Standing in the shadows of the abandoned house, Zola Saran waited for the Detective to arrive. Once he did, she’d have her prisoner to lure Jolie and her two mates back into the city.

Then, the games would begin.

Granted, this was the hardest part of her plan. It took her a few weeks to find worthy bait to draw them in.

Jolie wasn’t a fool. She would expect this, but that didn't mean that Zola shouldn’t try. All it would take is someone so important that they’d come running.

Since Jolie was a heartless bitch, that meant Zola needed to focus on someone important to her mate.
How she doted over her vile human was disgusting. The man was nothing more than meat on bones, and yet she revered him.

It made Zola want to scream in a rage. Detective Flynn Brogan was the reason her heart was ripped from her chest, and Zola wanted her revenge.

She had to avenge her mate.

Devin had died because of him.

Now, payback would be theirs.

There was no doubt in her mind that once they found out the worthless human friend was missing, they would come running. That was just like them.

It made her sick.

When they arrived, and they most certainly would, she’d begin her retaliation and avenge her mate. That cruel, cruel bitch, Jolie, had stolen his life simply because he’d allowed Jolie’s enemy into their home.

Who cared if her pathetic human mate was taken and almost killed?

It would have been for the better as Jolie was too soft toward the humans anyway.
It infuriated Zola to no end. She didn't understand it. How could Jolie sacrifice one of her own family for the sake of a human?

Now she would avenge her one true love by luring them all back to Philadelphia to kill Jolie and her mates, one by one.

She’d enjoy bleeding the human, little by little, as Jolie had done to Devin.

The kicker was--what she couldn’t complete in her plan, the council, which had banned the family, would.

It was her greatest hope that Jacques and Jolie would return to the city and be executed for their previous crimes.

She’d let them handle her.

But the human? No, he was hers to kill.

Detective Flynn Brogan would suffer more than he ever had in his entire life, and she’d enjoy every second of it. If they believed that Flynn had felt pain by Genevieve’s hand, they were wrong. That was going to be a walk in the park.

Zola would show him hell.

“Oh, Mistress, we’ll have so much fun finishing up the game. You should have ended my life when you stole my mate’s. Now that you let me walk free, I have no choice but to teach you a lesson. Softness only gets you one thing--DEATH.”

Flickering lights alerted her to the approaching SUV. Here came the bait needed to start her payback.
It was time.

Zola prepared herself to make the first move in her game of revenge. This plan had taken weeks, and she knew there was going to only be one shot.

If she failed, it would mean a more frontal approach. With Jolie’s command of Death, she’d never have a chance.

As the SUV moved closer, her eyes bled black.

Fangs slipped into her mouth, and she had to stop them. While she wanted to pounce, ripping the man apart, she knew the truth.

It was time to play human.

It was time to be weak.

© Copyright © 2015 Morgan Kelley LLC
All rights reserved. Without limiting rights under the copyright reserved above, no part of this publication may be reproduced, stored, introduced into a retrieval system, distributed or transmitted in any form or by any means, including without limitation photocopying, recording, or other electronic or mechanical methods, without the prior written permission of the publisher, except in the case of brief quotations embodied in critical reviews and certain other noncommercial uses permitted by copyright law. The scanning, uploading, and/or distribution of this document via the internet or via any other means without the permission of the publisher is illegal and is punishable by law. Please purchase only authorized editions and do not participate in or encourage electronic piracy of copyrightable materials.