Hello all!
Happy Monday Mourning... (yeah, it's that kind of day!)
I hope that you had a great weekend and got in lots of reading!
I was busy, busy, busy!
As I'm prepping for my hiatus, I've realized that when you're in crunch mode, everything that can go wrong, will go wrong...
Alas, packing for two kids for a month away is pretty much like torture!

I did get a good deal of writing done this last week. Blood Red Rage (book 1) in the Littlemoon investigation series is more than 1/3 of the way done. It's moving quickly now, as I weave in the 'whodunit' and vamp up a few sex scenes. I had been anxious about writing this book, because I'm losing the FBI team to fall back on when I find I need comic relief in the book.

When I'm writing about Lyzee or Emma, I can always go to a fun character to lighten the drama or mood, but with Blood Red Rage, I'm starting at the beginning all over again. So, no Doctor Leonard and his body parts, no Tony Magnus and his 'show and tell'.

It's been a challenge, but I have to say, I'm loving it. I haven't written the synopsis yet, but I can give you an idea of what it's going to be about. This is the first book in the Tori and Julian series, and we are watching them as they build their new business. As private investigators, they've found that business is picking up and requires a great deal of their time. It needs to, since they have four other employees that rely on them. (I think you'll recognize most of them from the FBI/Romance series)

Littlemoon Investigations has been hired to find a missing woman. Only, things are nothing like they thought them to originally be. Plus, I've introduced Detective Vivian Graves. She works finding the lost, and she has one hell of a secret and a new found appreciation for the Native form. (Justin Littlemoon- Julian's brother, gets a girl!)

As they race to find the missing woman, they are trapped in the madness of a serial abductor, who just can't stop at one collected prize.

Why ruin the fun before you get to read it?
But I will show you the cover because I love you all so much!
It was my inspiration for this book. 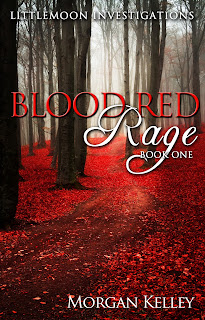 Anyway, back to packing and work. I'll be posting all through vacation from the sandy beaches of Myrtle, so, if you see a tattooed woman sitting on the beach with a blood red laptop... chances are it's me.
Stop and say hi!

Much love, Mayhem and Murder,

PS. Sacred Burial Grounds is now 1/4 of the way edited and should be done sometime next week. Look for the brand new cover.